The Buzz is Real..Internet of Things (IoT) the next Big Thing is here.
IoT is part of our daily conversation, from everyday consumers
to internet evangelists. 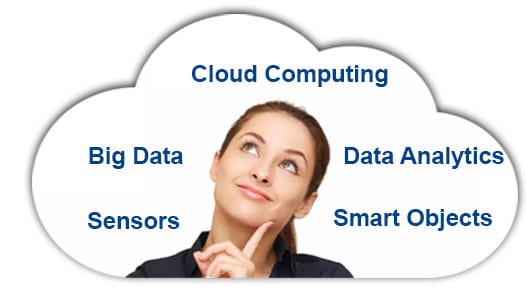 SFBay ISOC Board Message: Why IoT?

The Internet of Things (IoT) is an idea that has been around for a long time but is now starting to come to fruition. The idea is that anything and everything can have a sensor and can provide information to a remote collector somewhere else on The Internet. Our cars, our homes, farm animals, farmer’s fields, light bulbs, roads—just about anything—can be fitted with a data collection device and the information used to make smarter decisions, driving improvements in almost anything from business profitability to consumer value to public safety. The need to collect and analyze the huge amount of data collected is driving advances in Big Data computing. Such data collection, while creating many market opportunities and benefits from improved services, also raises significant privacy, security and interoperability concerns.

We are going to have a discussion with various stakeholders about these profound changes in The Internet and what they mean for individuals, corporations and society.

Bruce Nordman – Research Scientist Lawrence Berkeley National Lab, LBNL Topic: IoT Standards and Interoperability. IoT should be made to be easy to use, help reduce energy use, and aim for “universal interoperability”. Accomplishing this requires infrastructure in network architecture, and in technology standards of diverse types. Download Slide Presentation

Vinton G. Cerf is vice president and Chief Internet Evangelist for Google. He is responsible for identifying new enabling technologies and applications on the Internet and other platforms for the company.

Vinton Cerf, widely recognized as one of the “Fathers of the Internet” for his work on the design of the TCP/IP protocols and the architecture of the Internet, has served as Vice President and Chief Internet evangelist for Google since October 2005. He was chairman of the Internet Corporation for Assigned Names and Numbers (ICANN) from 2000-2007. He is currently also President of the Association for Computing Machinery. Mr. Cerf is also the former Senior Vice President of Technology Strategy and Architecture and Technology for MCI. While working with MCI, Mr. Cerf led the engineering of MCI Mail, the first commercial email service to be connected to the Internet. He currently serves on several boards and has received numerous awards for his continuously pioneering work including the U.S. National Medal of Technology, the ACM Alan M. Turing award, the Presidential Medal of Freedom, the Japan Prize and the Queen Elizabeth II Prize for Engineering. He was recently promoted to Officer of the French Legion d’Honneur.

Cerf holds a Bachelor of Science degree in Mathematics from Stanford University and Master of Science and Ph.D. degrees in Computer Science from UCLA and holds 21 honorary degrees from universities around the world.

Karen has been an active participant in Internet discussions in various international governmental and non-governmental organizations including the ITU, OECD, and ICANN.

Karen has been active across Internet technology, policy, and development for nearly 20 years, including prior roles in Internet start-ups, government, and management consulting. She began her career in public policy working on Internet and e-commerce issues at the U.S. Federal Communications Commission. She later joined the National Telecommunications and Information Administration of the U.S. Department of Commerce where her work focused on the coordination of Internet naming and addressing functions, including the domain name system, ENUM, and IPv6.  She received the Department’s Gold Medal award and several additional honours for her work to privatize and introduce global competition in domain name system services.

In 2002, she left government to join an Internet start-up in Sydney, Australia where her responsibilities included corporate strategy and product development. Just prior to joining ISOC, Karen was an independent ICT consultant based in Cairo, Egypt and Sydney, Australia.

Prior to taking up her current role within ISOC, she was responsible for leading the organization’s efforts to expand Internet infrastructure, access, and related capacities around the world.  Among her accomplishments, she spearheaded the Internet Society’s highly successful work to improve Internet interconnection and traffic exchange in emerging and developing economies, which has fostered Internet exchange point development and increased peering in numerous countries around the world.

Bruce Nordman is a Research Scientist at Lawrence Berkeley National Laboratory.  He focuses on energy use and efficiency of electronics and networks, from physical layers to application layers and user interfaces, as well as power distribution.

Scott Burleigh has been a software engineer at the Jet Propulsion Laboratory, California Institute of Technology, since 1986.

Mr. Burleigh co-authored the specification for the CCSDS (Consultative Committee for Space Data Systems) File Delivery Protocol (CFDP), an international standard for file transfer over interplanetary distances. Mr. Burleigh developed the first implementation of CFDP, which was adapted for operational use on a number of flight missions, including JPL’s Deep Impact comet exploration mission.

Mr. Burleigh leads the development and maintenance of implementations of BP and LTP software, with the long-term goal of enabling deployment of a delay-tolerant Solar System Internet. The ION version of DTN software is now in continuous operation on the International Space Station and is being used for operational studies on-board the EO-1 Earth-orbiting spacecraft.

Mr. Burleigh has received the NASA Exceptional Engineering Achievement Medal and four NASA Space Act Board Awards for his work on the design and implementation of these communication protocols.

Merike is the Chief Technology Officer of Farsight Security and is responsible for developing the technical strategy and executing its vision. She is a recognized global expert of networking technologies and information security.

She led the first security initiative for Cisco in the mid-1990s, authored the Cisco Press book “Designing Network Security” and has for over 20 years worked with numerous companies creating strategic operational security and resilient networking architectures. Her contributions to support the deployment and understanding of IPv6 security issues earned her an IPv6 Forum Fellow status in 2004. Merike has contributed to the IETF since 1992, a pioneer member of ISOC, is on ICANN’s Security and Stability Advisory Council (SSAC) and the FCC’s Communications Security, Reliability and Interoperability Council (CSRIC). She earned a MSEE from George Washington University and a BSEE from Rutgers University.


Michele’s passion is to inspire, lead and mentor people. She joined Cisco in March 1996 as the founding member of Cisco’s internal security team, which is now the Security and Trust Organization under John Stewart. During her 19+ years at Cisco, she has had the opportunity to work on all facets of cybersecurity security.

She has been an active speaker at customer engagements, she was the founding member and lead on Cisco’s early IDM initiatives, and she was the founding Security Domain Architect for IT’s virtual infrastructure architecture team. From 2007 – 2009 lead the security track for the implementation of HRMS and to develop the strategy for security for HR & Finance IT. . In 2010, Michele was promoted to Distinguished Engineer, one of 8 female DEs across Cisco. She recently co-founded the Cisco Women in Cybersecurity Community which has strong focus on expanding awareness about the numerous and exciting opportunities in the field of cybersecurity and she is the Chief Security Architect for the Security domain in IT.

Outside of Cisco, Michele has been an avid participant, speaker, teacher, influencer and evangelist in the cyber security industry for over 26 years. Her most recent work focuses on developing & codifying the practice and art of Information Security Engineering & Architecture. Her motto is all about “Building it in and not bolting it on”. She was recently received a SANS 2014 Difference Makers’ Award for leading the Security Knowledge Empowerment (SKE) program, which makes security part of the DNA of all Cisco operations.

“My passion is to develop and build the next generation of cyber security professionals through innovative, relevant and collaborative training. Tribal knowledge must end and information and expertise must be shared and codified if we, as an industry, are to outpace the well-connected and highly-skilled cyber underground”, she says. “The threat landscape changes daily and cyber security professionals must be willing to partner, constantly learn and stay engaged”.

Michele has B.A., in Mathematics with a minor in Cybernetic Systems, and has also completed a two-year program in Biblical Studies. She is currently working on her Masters in Software Engineering with a concentration in Cybersecurity.


Girard Kelly is an attorney focused on Internet, privacy, cybersecurity, and Intellectual Property law who has a strong background in public policy, information technology, entrepreneurship, and emerging technologies.

Girard Kelly is an attorney focused on Internet, privacy, cybersecurity, and Intellectual Property law who has a strong background in public policy, information technology, entrepreneurship, and emerging technologies. Currently, Girard is a legislative assistant at the California State Legislature for Assemblymember Ed Chau, Chair of the Privacy and Consumer Protection Committee, and Select Committee on Emerging Technologies. Girard received his Bachelor’s degree in Business Administration and Management Information Systems from the University of Arizona, Master’s Degree in Applied Ethics of Science and Technology Policy from Arizona State University, and J.D. from Santa Clara University School of Law.


Michael R. Nelson works on Internet-related global public policy issues for CloudFlare, a startup that has improved the performance and security of more than four million Web sites worldwide.

Prior to joining CloudFlare last year, he was a Principal Technology Policy Strategist in Microsoft’s Technology Policy Group and before that was a Senior Technology and Telecommunications Analyst at Bloomberg Government. In addition, since January, 2009, Dr. Nelson has been teaching courses and doing research on the future of the Internet and cyber-policy at Georgetown University. Prior to joining the Georgetown faculty, Nelson worked for almost ten years at IBM.  He started his career in Washington, DC, working for Senator Gore, then chairman of the Senate Subcommittee on Science, Technology, and Space. After five years on Capitol Hill, he moved to the White House and worked with Vice President Gore and President Clinton’s science adviser on issues relating to telecommunications policy, cybersecurity, encryption, electronic commerce, and information policy.  Dr. Nelson has a B.S. from Caltech and a Ph.D. from MIT.


George Minardos is an entrepreneur and builder with over two decades of professional experience in technology, architecture, construction and development.

He applies his innovative building process and related knowledge to a host of different project types which has made him a trusted member of the building industry for designers and owners of challenging and sophisticated buildings.  He shares a dual passion for technology and has founded several tech companies which enable builders of virtual and real projects.  Recently these two passions are intersecting with increasing frequency allowing him to speak and share his thought leadership with both industries.Educated at the Wharton School of Business at the University of Pennsylvania and UCLA, George heads both a consultancy in strategic space planning/construction planning and the .build gTLD. His expertise includes the building trades, environmental affairs, and tools for sustainable building design and construction. He is a Strategic partner of Associated General Contractors of America (AGC) and also a Strategic Partner of the American Subcontractor’s Association (ASA).