A very interesting and informative meeting SFBayISOC meeting (with
excellent buffet sandwiches for dinner) was held at ISC (thanks for
their assistance) in Redwood City June 29, 2016, 6:30PM to 9:00PM. 16
people attended to learn more about ISOC, think about areas where they
might contribute and hear from the US Department of Agriculture (USDA)
about the expanding role of the Internet in food production. 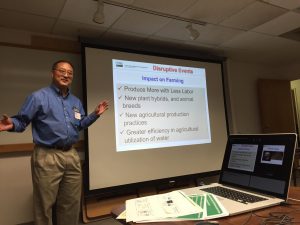 Janet Vong, SFBayISOC Board Member responsible for membership
engagement, introduced Leah Symekher, Chair of SFBayISOC, who gave a
short presentation on the SFBayISOC. Ken Krechmer, founding member of
SFBayISOC and Treasurer, gave a presentation of the role of ISOC and how
the members of each chapter are the political basis of the Internet.
Next Eve Edelson, SFBayISOC Board member and liaison to ISOC via NARALO,
discussed the ways SFBayISOC interacts with the many organizations that
are active in the Internet development, operations and policy. Leah
presented on behalf of Jean-Jacques Subrenat, SFBayISOC Board member
from France, on the prominence of the Internet today and the future challenges.

Robert Tse from the USDA gave a very interesting presentation. First he
explained the disruptive events occurring in agriculture: drought,
global warming, newly emerging diseases and the decline of migrant farm
workers. He then explained the need to double the food production of
every arable acre world-wide over the remainder of this century to feed
the rising population, even in face of these disruptive events. He noted
that in every case the path to double food production is science to
increase crop resistance and technology to increase agriculture
production and reduce the use of resources. One area that needs to be
developed is an extension of the broadband Internet to agricultural
areas to support the IoT related to agriculture. He supports state
government directed activity to extend the broadband to rural areas,
along the lines of rural electrification (which was very successful
economically) and hopes that ISOC members will also lend their support. 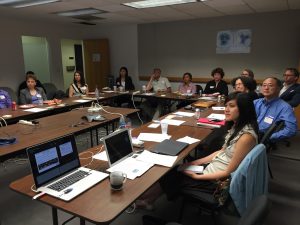 Here are the powerpoint decks from the meeting: