Shadow Regulations and You

Shadow Regulations and You

Shadow Regulations and You: One More Way The Internet’s Integrity Can Be Won

Even those who care about net neutrality might not have heard of the aptly-called Shadow Regulations. These back-room agreements among companies regulate Internet content for a number of legitimate issues, including curbing hate speech, terrorism, and protecting intellectual property and the safety of children. While in name they may be noble, in actuality there are very serious concerns that Shadow Regulations are implemented without the transparency, accountability, and inclusion of stakeholders necessary to protect free speech on the Internet. A recent SF-Bay Area Internet Society (ISOC) Chapter event, co-hosted by the Electronic Frontier Foundation (EFF) and in collaboration with the global Internet Society, put the spotlight on how to improve these agreements.

The keynote speakers from EFF, Mitch Stoltz, Senior Staff Attorney and Jeremy Malcolm, Senior Global Analyst, acknowledged that there is a place for Shadow Regulations in an open Internet, but not without some serious modifications. After all, the basis of the Internet is the voluntary adoption of standards, and Shadow Regulations have the benefit of crossing borders and being more flexible, cheaper, and faster than traditional legislation. These regulations can take many forms, including codes, standard, principles, and memorandums of understanding (MOUs), and can pop up at many vulnerable links across the Internet, which the EFF calls Free Speech Weak Links. 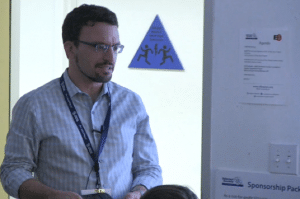 So when should the public be concerned about Shadow Regulations encroaching on Internet freedoms? Whenever there is no space for transparency, accountability and user participation, very shady Shadow Regulations can be implemented. Take, for example, policy laundering: when governments want to implement unethical policies, such as curtailing freedom of speech, they can place the blame on companies through these regulations. Stoltz explained, “It’s an abdication of responsibility to pressure platforms like Facebook to come up with a policy and enforce it while government washes its hands [of any responsibility].” When governments are backing these agreements, they’re not necessarily voluntary, as companies might be engaging to curry governmental favor.

In the current system, an industry can restrict content and then prop itself up as judge, jury, and executioner. Spreading these roles across impartial bodies with multi-stakeholder processes is one obvious solution. This requires balance, inclusion, and accountability: one stakeholder cannot overpower the others, the right stakeholders have to participate and be given resources to participate, and there need to be standards set that keep the body and stakeholders accountable from and to each other. In some cases, Shadow Regulations won’t be the most effective solution: for example, in the case of hate speech, it may be more effective to empower users to limit their exposure to it rather than trying to erase it off the Internet.

About the SF-Bay Area Chapter

The San Francisco Bay Area ISOC Chapter serves California, including the Bay Area and Silicon Valley, by promoting the core values of the Internet Society. Through its work, the Chapter promotes open development, evolution and access to the Internet for those in its geographical region and beyond | www.sfbayisoc.org

This article was written by Chapter member Jenna Spagnolo on behalf of the SF Bay Area ISOC Chapter.