Bio – Natalya Tyudina is a global citizen: was born and raised in Tajikistan, studied in Russia, and now lives in Germany. XR enthusiast and Technology Developer at Ericsson. TechWomen Fellow 2019, hosted at Twitter. (LinkedIn | Twitter | Email)

Central Asia stretches from the Caspian Sea on the West to the Chinese border. The “-stan” region historically has been a part of a Silk Road and also part of the Soviet Union in the past century. This community of countries consists of five republics: Kazakhstan, Kyrgyzstan, Tajikistan, Turkmenistan, and Uzbekistan. Its total population is about 72 million people. 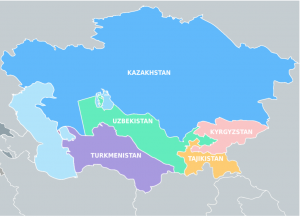 The Information Technology market has been booming in the region for the last decade. As part of IT, emerging technologies started growing in the Central Asian Market as well. Before going into details and popular use-cases in the “-stan” region, let’s go deeper into these technologies.

Virtual Reality (VR) – is a simulated experience of a new space with computer-generated visual elements, objects and sounds. It is fully immersive and actual surroundings are not visible to the user and only the virtual environment exists. The head-mounted displays and controllers are the main devices used for navigation through this experience.


The technology has an uncounted number of different use-cases from gaming to industry 4.0. Also, VR can help users gain skills through virtual experience, which is frequently used for education purposes. In the pandemic world, the technology can be used for virtual travel and not only around the globe – also in time and space, without leaving your home. This immersive technology helps to build empathy by showing, for instance, the consequences of natural disasters.

Augmented Reality (AR) – uses the real physical world with augmentation in a form of computer-generated visual elements, objects and sounds. Through a camera, a user can see the real world with virtual overlays. The main and most popular devices that are used for AR experience are smartphones with AR support.

AR use-cases are focused on augmenting the real world with useful information and hints. For example, this technology can help users navigate on a street by giving visual hints on a display or to translate a text in foreign language by just pointing a phone at it.

Mixed Reality (MR) – usually refers to a mixture of VR and AR technologies co-existing in the real world. MR technology anchors computer-generated elements or objects to a real world object. The main device is MR glasses containing not only a camera, but also sensors.

There are different MR use cases, such as education, engineering and sales. The MR technologies are specifically valuable when free hands are needed. MR can make the onboarding process easier – real time MR navigation can help users to repair details and do maintenance.

Extended Reality (XR) – includes all of the three technologies (AR, VR, MR) from above in a one big group. The XR contains human-machine interactions and includes virtual as well as real environments. 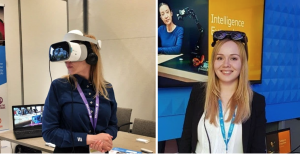 On the left side – VR headset; on the right – MR headset

Let’s go through Central Asian countries and learn more about use cases of extended reality technologies.

Unicef Tajikistan organized a VR experience corner at the International Disabilities Forum in Dushanbe. Through VR headsets, attendees could learn about the everyday difficulties of children with disabilities. There were two use cases: one showing how difficult it was for people with wheelchairs to navigate streets and the second showing their difficulties of moving within a school. These demos got high attention.

Another group of local enthusiasts from American Space and Makerspace Dushanbe are concerned about the fast-changing architecture of the city and want to preserve memories of historical places. They are capturing monuments and buildings using 360 degree cameras. Also, this virtual sightseeing experience is available in VR headset onsite. In plans, they want to capture the full serenity of the Central Asian region to create VR tours. 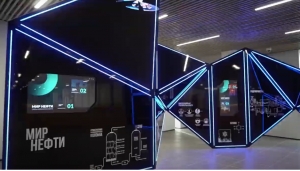 Team “Vinetki Kz” moved the idea of school yearbooks to a new level. By using augmented reality and image recognition, they allow users to see video overlays on top of classmates’ photos, with whom they share their best memories of the school. 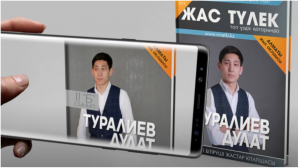 Teams in Kyrgyzstan are focused on building on solid knowledge in the extended reality field.

The Russian Digital Collaboration community started a series of workshops about virtual and augmented reality technologies. During the workshops, the audience will be shown the most resonant projects using virtual and augmented reality technologies. In the practical part, students will build extended reality projects in groups. The program aims to develop digital competence and skills for high school students.

The American University of Central Asia has organized AR/VR meet-ups focused on Computer Vision. The aim of the meetups is to create a unified discussion platform among developers, scientists, and students of Kyrgyzstan and Central Asia interested in the emerging trends in AR/VR and Computer Graphics, and contribute to the advancement of science and IT industry in the region.

The founder of VR Studio VRonica in Uzbekistan Akmal Salihov shared his thoughts about projects of the studio:

“I’m not sure if we prefer to develop virtual walks through the interiors of apartments than 360 degrees capturing of museums or VR electric meter assembly simulators. All of the use-cases are unique and exciting!”

“If we are talking about private studio projects, our favorite project is a music VR game that will be released in Steam and Oculus Store soon. We have been working on it for more than a year and showed during the White Nights 2019 conference in Moscow. “ 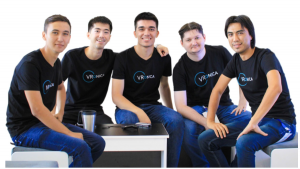 In a couple of years, XR technologies will start actively spreading in the Central Asia region and in 5-7 years become a daily use device close to wearable devices. Akmal has also shared this perspective on the Central Asian market –

“Central Asia has a 50+ million population and AR/VR solutions will be in high demand in many areas, but primarily in the areas: demonstration of residential complexes, simulators, and educational projects.

In addition, the culture and mentality of the Central Asian population are extremely close to the Middle East. It seems to me that if certain AR/VR projects which will show profitability in our region, then they will most likely be scalable to the Middle East, and unlock the opportunities to a larger number of consumers.”